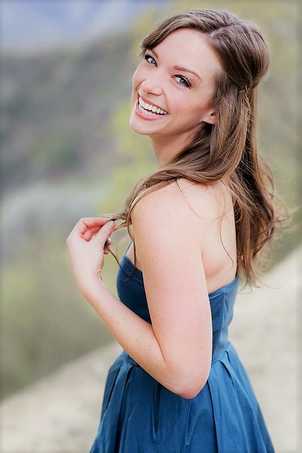 Thanks for being here! Here's a bit about me and my journey with entertainment -

I grew up in southern California with a loving family and a passion for involvement. Early on, I identified a particular love for dance and performance. By my senior year of high school, I landed the title role of Juliet in our school production and ignited a slight obsession with acting that would only continue to grow. Valedictorian of my graduating class, I decided to attend college at the best place to unite my academic goals with my artistic needs: Los Angeles.

I earned B.A. in Mass Communication Studies with Departmental Honors from UCLA and enjoyed the crap out of my college years. I started studying acting formally and landed some roles in theater, student and short films, while acting as my own agent, manager, and publicist. I then originated the lead role of Rachel Scott in the world premiere of "The Columbine Project" in Los Angeles and traveled with the production to perform the same role Off-Broadway in New York.

I returned to LA eager to work and armed with representation. I continued my education and made my way to the small screen on TV shows and commercials. I have had a long career performing consistently for the Walt Disney Company and Universal Studios Hollywood. I churned out some passion projects for YouTube that had some good success (though it's possible the millions of views all came from my mom).

As I gained momentum in my career, I got the opportunity to expand to Atlanta and explore the growing industry in the southeastern US. I established a stronger TV presence and made my way to the big screen in "Table 19," where all the stars attended my wedding and Anna Kendrick played my best friend. I've had the great fortune of working alongside Oscar winners and close friends who I'm confident will also be in that category someday.

I am continuously studying, learning, working, and creating the next opportunity. My most favorite real-life role is "mom" to my two boys. I am so grateful to be healthy, happy, thriving, and doing what I love.